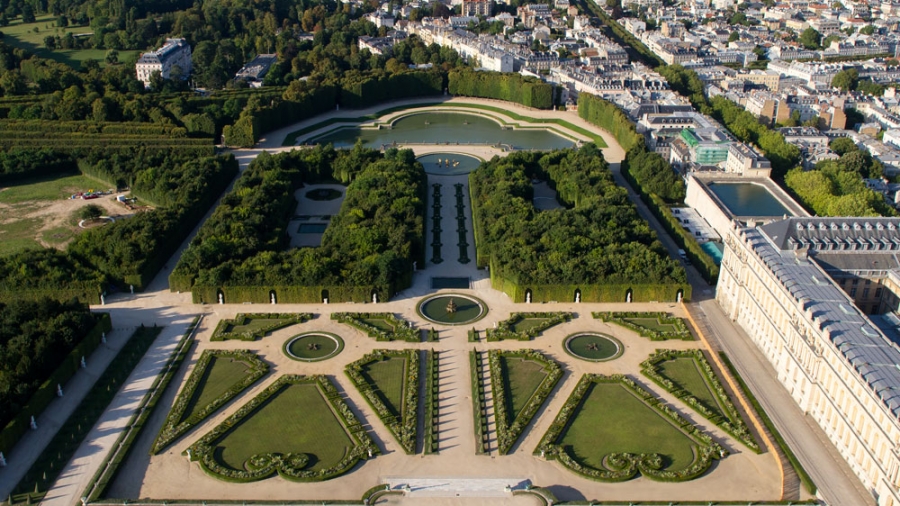 by Carol Verhake
I speak Latin frequently. After all, using the Latin name for a plant (genus, species, and cultivar name) is the best way to make sure other passionate gardeners know exactly which plant I’m referencing. This week, while watching the Roku series called ‘British Gardens in Time’ I learned some new terms to add to my gardening vocabulary. Just in case you’re appearing on Jeopardy soon or need a good word for Scrabble, I thought I’d share my discoveries with you.
Parterre.
The word parterre means a formal garden, constructed on a level space, consisting of an ornamental arrangement of flower beds. Parterres originated in the 15th century gardens of the French Renaissance. Think knot gardens of trimmed boxwood filled with herbs or carpet-like patterns of non-hardy flowers. Often these garden spaces included pathways of gravel or grass that connected the planting beds. The French parterre reached its peak of popularity at the Palace of Versailles, which inspired many similar parterres throughout Europe and the world.
Parterre gardens lost favor in the 18th century and were superseded by more naturalistic planting styles. Then, similar to the fashion industry, the parterre was revived with a twist, demanding a raised vantage point from which to view the garden design below.
The best examples of modern day parterre gardens that I am aware of are located at Longwood Gardens. The formal Italian Garden has a parterre feel to it with its symmetrical, formal beds and pathways. Longwood’s 2017 holiday Exhibition Hall display was intentionally constructed as an indoor parterre. Modern landscapes incorporate many of the principles the parterre introduced such as trimmed boxwood hedges to contain garden spaces and formal, symmetrical designs. Even my grandfather’s garden had a parterre of sorts. While not on a level landscape, each year he planted thousands of annuals in geometric patterns with surrounding pathways, causing many a passerby to stop and admire his work with each changing season.

Ha-ha.
No, I’m not laughing at you. A ha-ha is an official landscaping term. It refers to a design element that creates a vertical barrier while preserving an uninterrupted view of the landscape beyond.
A ha-ha typically includes turfed area that slopes downward to a sharply vertical face, usually a masonry retaining wall. Historically, ha-has were used in landscape design to prevent access to a garden, for example by grazing livestock, without obstructing views. The unusual name “ha-ha” is thought to refer to that ‘aha-moment’ and exclamations of surprise by those coming across them since the walls were designed to be invisible.
I like the idea of a borrowed view, while containing the boundaries of a property. Today we are not always trying to keep the cattle out. We are more often trying to keep the kids and pets in. A see-through or invisible fence serves this purpose without inhibiting the view of the landscape beyond. The very desirable infinity pools could also be considered a ha-ha, but with water instead of land.
Pinetum
A pinetum is defined as a collection of living coniferus (cone-producing) trees. I was surprise to learn via a Google search that a number of Pinetums exist in my own backyard. Three of the arboretums near my home (Haverford, Tyler, and Scott) tout their collections of conifers. Now that I know there are so many pinetums nearby, I’ll have to pay some a visit!
Historically, pinetums showed off a collection of unusual evergreens. An added benefit was something to look at in the winter and often a wind screen that protected other parts of a garden and helped create a much-needed micro-climate for more tender perennials and shrubs. In addition to the local arboretums, many private gardens use conifers to screen their properties from neighbors or from unsightly views.
There you have it. Three new words and three new landscape design concepts. Concepts that are still relevant in today’s gardens. You’re welcome. Now go out and impress someone with your newfound knowledge!