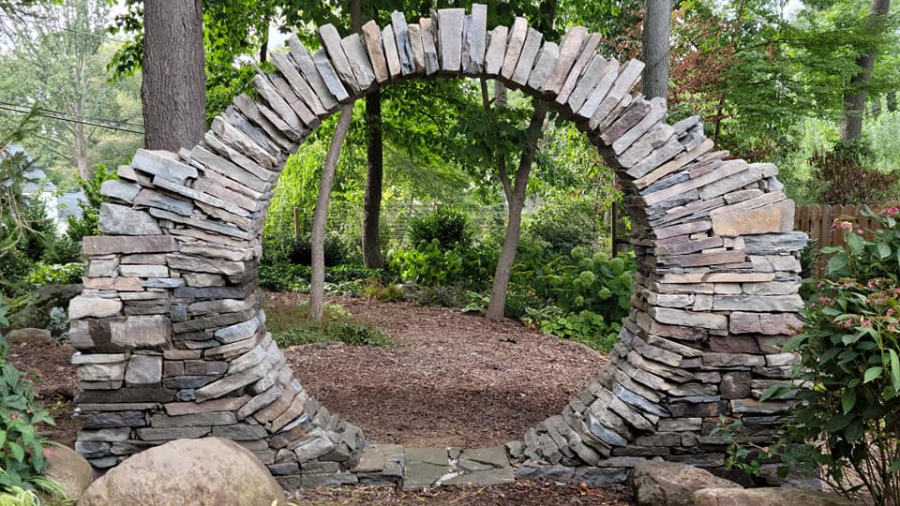 I adore the garden movie Dare to Be Wild. The film tells the story of Mary Reynolds, an Irish landscape designer and youngest winner of a Gold Medal at the Chelsea Flower Show in 2002. Mary’s exhibit encouraged visitors to reconnect with wild nature and featured a moon gate leading down a path to four stone thrones surrounding a fire pit over water. 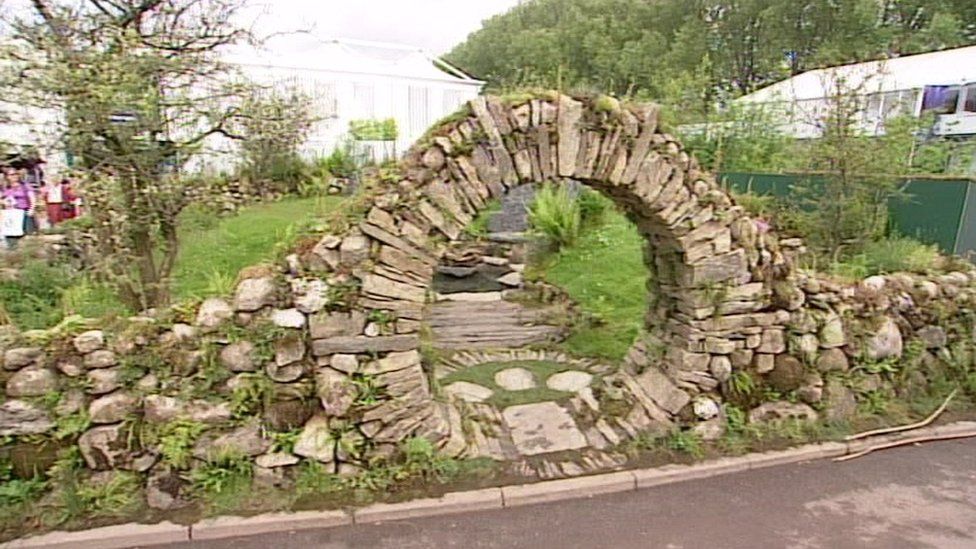 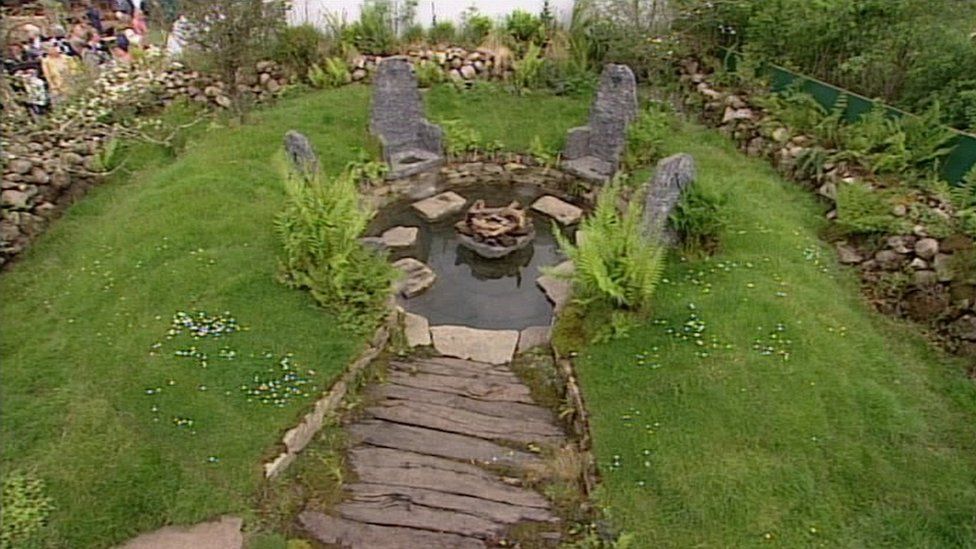 Mary built an exhibit with thrones and a fire pit

Mary’s exhibit inspired me. The moon gate, which her character in the movie describes as a transition from the natural to the spiritual world, blew my mind. Popular in many cultures, moon gates originated in China, serving as inviting entrances to upper class gardens. Bermudians have featured moon gates in their architecture since the late 19th century.

I am happy to report that Chester County, PA now features a moon gate and it’s installed in my back yard where it marks the entrance to my woodland garden and replaces a temporary arch made of twigs. I adore the symbolism of the moon gate and am thankful I was able to find a talented mason willing to make my vision a reality. 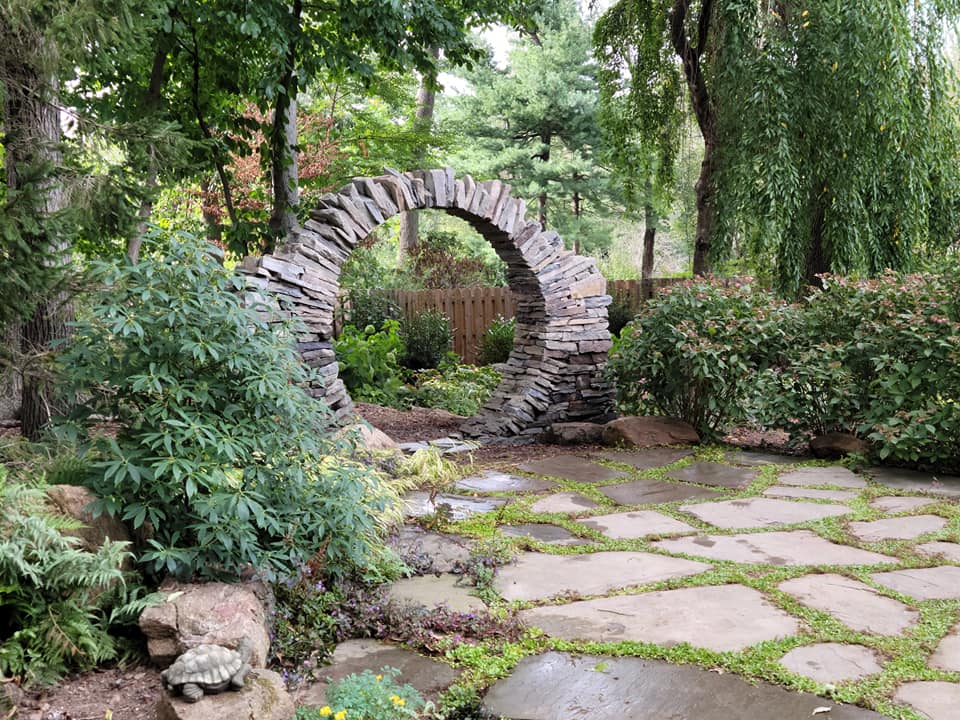 Scott of KM Gardens had never built a moon gate before but was excited to take on this ‘once in a lifetime’ challenge. Scott researched construction techniques and procured the perfect Pennsylvania fieldstone to integrate with existing boulders on my property. 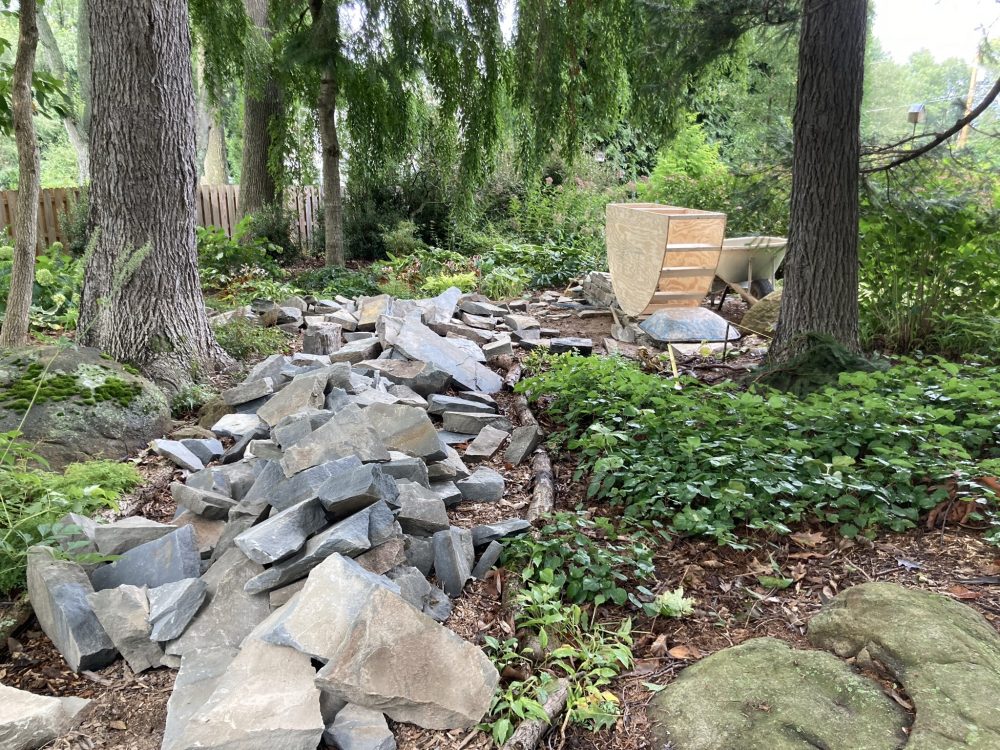 Rocks delivered and the template in place 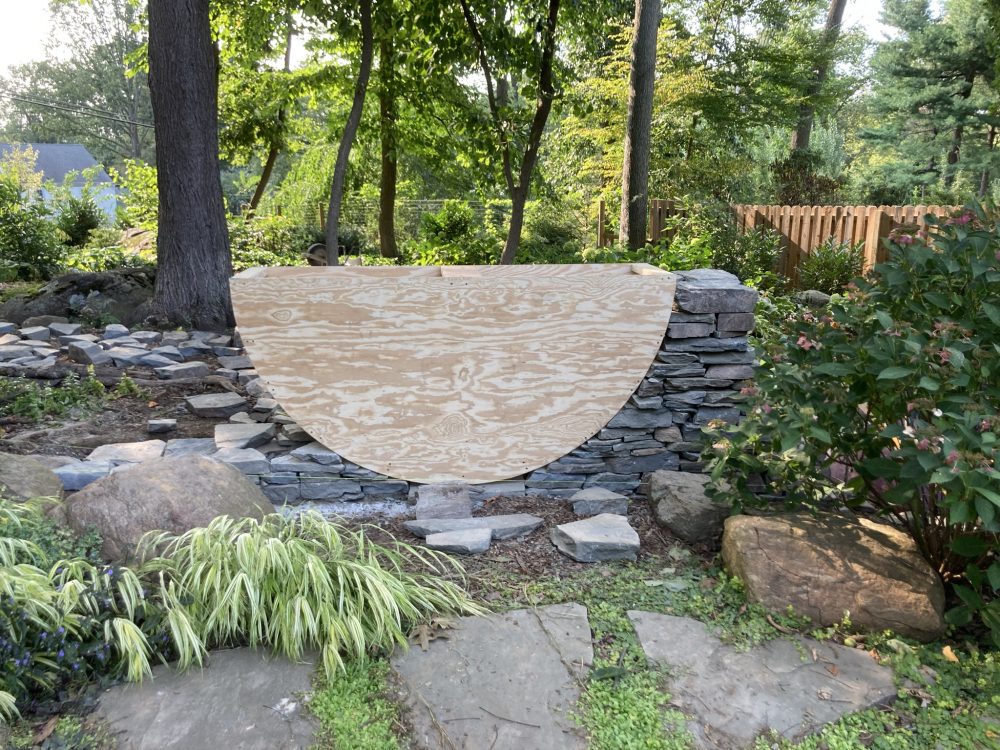 The initial moon gate under construction

Scott began work in September. After a week of stone chiseling and stacking, we were excited for the unveiling. Poised in front of the structure, I began to videotape the reveal as the wooden frame was slowly removed. Unfortunately, the first attempt wasn’t successful and the grand structure collapsed before our eyes. Fortunately, no one was hurt physically. Pardon the expletives as you watched the video. As you can imagine we were shocked and disappointed!

Scott, a true craftsman, regrouped after this disappointment, revisited tutorials on construction and started over the next morning, making multiple adjustments including the angle of the stones and the addition of mortar to keep the stabilizing sides from moving. Version two was a success! 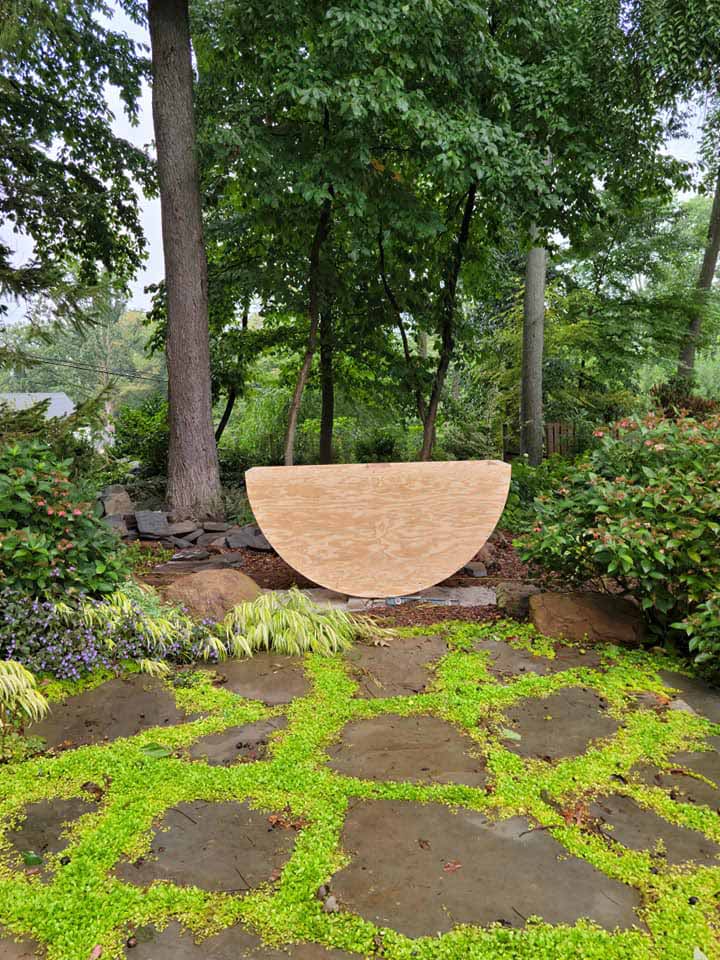 Starting over with the wooden form 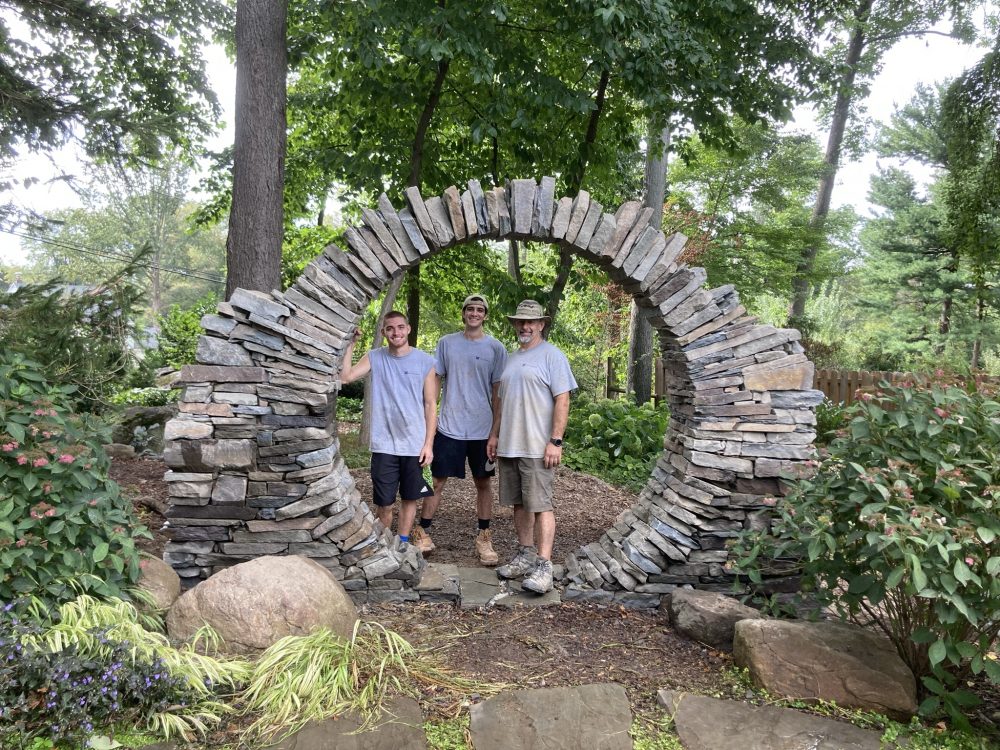 Scott and team with the finished moon gate

Now I’m inspiring friends with my moon gate, which has been described as gorgeous, stunning, awesome, beautiful and the coolest thing ever! I agree on all fronts and am thrilled to enjoy it as an amazing architectural accent to my landscape. 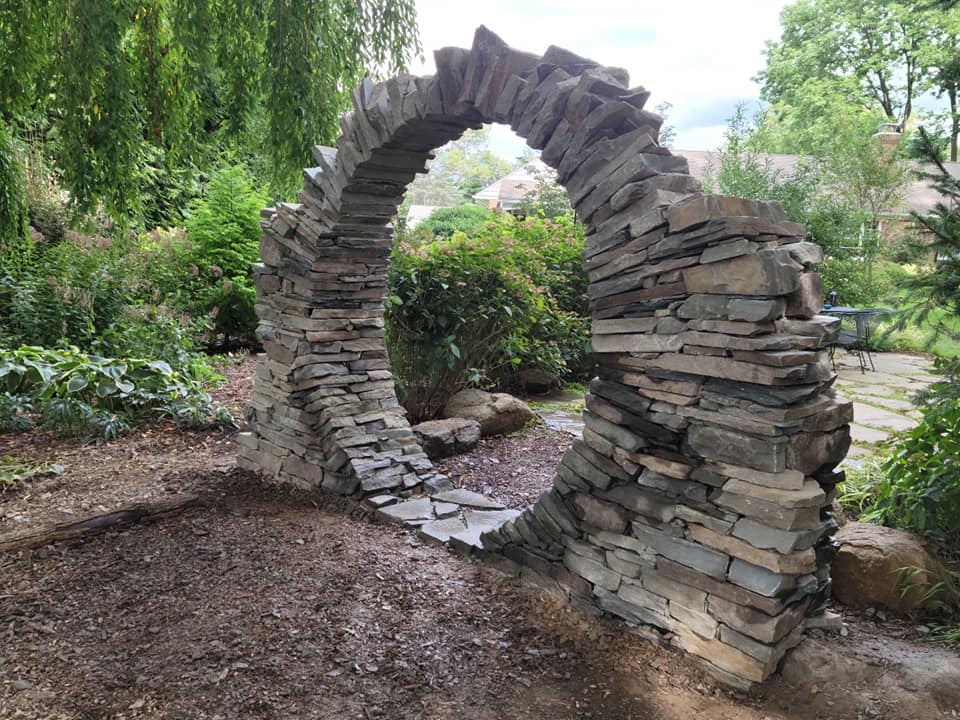 Beautiful from all sides

I’m pretty sure Scott’s once in a lifetime project is going to become a series of moon gates as I expect others to request his services. And I’ll continue to share Mary Reynold’s story and encourage others to invite wild nature into their own gardens.